In the latest episode of Attarintlo Akka Chellellu, Dharani finds out that Hamsa was lying to her about Shivudu. Read the full update here. 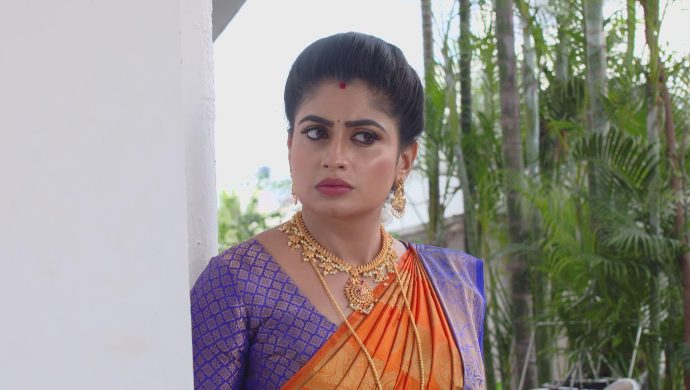 Earlier in Attarintlo Akka Chellellu, Priyamvada tells Hamsa to get Vikram’s signatures on a file, and Hamsa adheres to it. Shravani sees Vikram signing without studying the file and tries to warn him. Vikram says that he cannot question Dharani’s requests. They have a silly argument about disagreements and divorces when Aditya walks in. Seeing them talk normally, he compliments Shravani and complains about Dharani. Shravani feels proud and Vikram laughs it off. Dharani tries calling Hamsa, who does not answer her calls.

In the latest episode, Dharani goes home and calls out to Hamsa. When Hamsa starts to answer her questions, Priyamvada pretends to be on a call. She refers to someone named Prabha, and says how talking about things would further the damage. Dharani sees Hamsa tense up when Priyamvada starts moving around them and understands that there is something fishy. Dharani lets go of the conversation then, but burns her hand later while cooking, as her mind continues to wander. Aditya sees this and goes to her rescue, he apologises for scolding her earlier.

Aditya promises to be kinder and when Dharani asks him to let go of it, Aditya asks her to continue their roleplay game. Priyamvada wonders what has gone wrong with Aditya again, and why he wasn’t being angry or cranky. That’s when the accountant’s father comes with a file and meets Dharani, asking for her signature for a new bunch of students. Just when Dharani is about to sign it, Vedavati walks in and takes the file. She reviews it and hands over it to the accountant again. She constantly repeats that there shouldn’t be any mistakes, or the consequence would be bad.

Dharani assumes it to be a warning for her, by Vedavati, but does not act on it. The next day, everyone gets ready for the Satyanarayana pooja. She finds a moment with Hamsa, and asks about Shivudu’s whereabouts. However, seeing Priyamvada around, Hamsa freezes and lies again. Later, Dharani sees Hamsa talking to a man outside their house. When eavesdropping their conversation, Dharani finds out that Hamsa had lied to her about Shivudu’s visit to their native place.