In the latest episode of Attarintlo Akka Chellellu, Dassamma figures out the 'mistake' and walks away from Shravani. Read more about it here 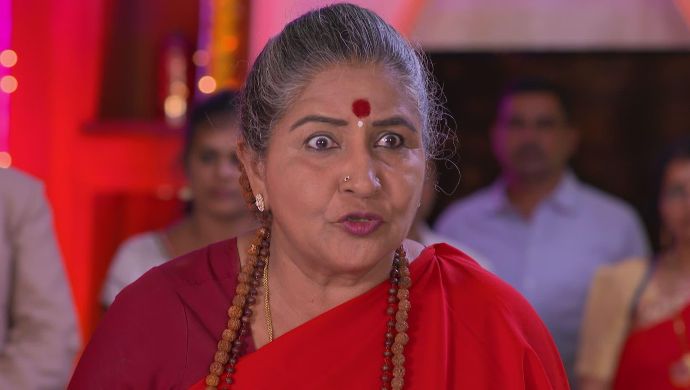 Earlier in Attarintlo Akka Chellellu, Priyamvada dreams of Vedavati cancelling the wedding. In reality, she executes her plan, but Dharani sees the card burning and holds the card tightly to extinguish the flame. She tells everyone that the card is safe and the envelope has burned a little. The priest says that this flame was to ward off the evil eye and they can proceed with the wedding preparations. Once they go home, Hamsa applies ointment to Dharani’s palm. Aditya tries to prove that Dharani hasn’t done anything great. He holds a piece of burning camphor and ends up burning his hand.

In today’s episode, Vedavati tells Shravani about Dassamma and asks her to be ready in time. Shravani nods in agreement, wishes everyone goodnight and leaves. The next morning, Vikram comes fully ready but Shravani is nowhere to be seen. When Vedavati checks with Vikram, he informs that she must be getting ready for the day. Priyamvada sees the house-help taking a glass of milk for Shravani. She distracts the house-help and adds a tablet to the glass of milk.

When the house-help knocks on Shravani’s door, she is deep asleep. Shravani quickly dresses up, without bathing, because she could not waste time any further. Vedavati awaits patiently and soon, Shravani walks down the stairs to meet Dassamma. Priyamvada wonders how Shravani did not fall into a deep sleep after drinking the milk. Vedavati takes Shravani close to Dassamma and asks her to wash Dassamma’s feet and seek her blessing.

Shravani does as instructed with a smile on her face. While doing so, she thinks about her misfortune to be touching someone else’s feet. But she tells herself that it will all be worth it. Dassamma senses something wrong and gets up from her seat. Vedavati asks what was wrong and why she had not blessed her daughter-in-law-to-be. Dassamma says that some mistakes can be forgiven but some mistakes cannot be overseen. As she starts walking away, Vedavati asks what the mistake is.

Shravani wonders if the lady really figured out that she hadn’t bathed. Dharani, too, wonders why Dassamma hadn’t blessed her sister. Vedavati tells Shravani to seek her blessings before the wedding. Priyamvada tries to talk negatively, but Vikram shuts her down. Hamsa offers to do Priyamvada’s makeup and spends some time doing nothing. Before leaving, she adds a hair-clip, which has an integrated mic, in Priyamvada’s hair.

Wow Wednesday: 7 Times Rakulpreet Made Our Hearts Skip A Beat With Her High-Slit Fashion