In today's episode, Dharani says her final goodbye to her parents and to her sister. Read the full update here. 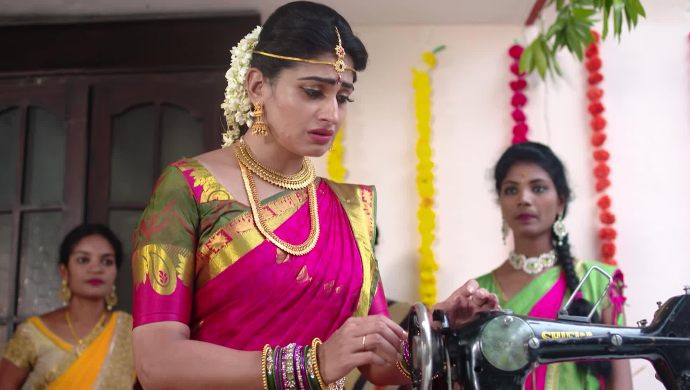 Previously, in Attarintlo Akka Chellellu, Aditya tells his mother that he must save Dharani anyhow else she will ruin her life. Vedavati tries to explain to him that he mustn’t interfere in their matters, but he refuses to listen. Finally, Aditya takes the matter in his own hands and leaves the house the next morning. Along with that, he also keeps a letter, his phone and wallet in his room.

In today’s episode, Vedavati’s husband tells her that he expected Aditya to calm down after the fight. However, he did not expect this behaviour. Vedavati explains how she wanted him to marry the girl he met. But she opposed because he never was happy with her. Vikram explains to his parents that just because he has gone there, Dharani’s folks will not let him marry her. Vedavati cries saying that’s what she fears. He might be rebellious and get what he wants. She tells them that Aditya should be safe and sound in front of her at the earliest.

At the venue, Godavari tells Dharani how beautiful she looks and Dharani is reminded of the time when Aditya complimented her. She tells her mother that she does not feel like leaving her parents and sister. The mother-daughter hug each other and cry about how that’s a girl’s fate and they cannot escape it. Although most parents feel happy about the new family for her daughter, Godavari tells that she isn’t. Narayana and Shravani come in and start dissing them.

Mallesh helps Shanakarayya get ready and everyone compliments him. As they prepare to leave, Shankarayya demands for a better car and Saiydamma threatens him to get in. If he doesn’t, she tells Shanakarayya that he can stay back and Mallesh will marry Dharani. To this, Mallesh quickly agrees. This annoys Shankarayya and he gets in. On the other side, Godavari cries looking at Dharani, who is praying to the gods before entering the wedding hall.

Next, she touches her parents’ feet and Narayana half-heartedly blesses her. Dharani cries while talking about how she has been a disappointment to him. She says that he’ll be free now that she is going away. Yet, this does not melt his cold heart. She bids goodbye to Shravani too. Dharani tells her to take care of their parents and wishes her the best, since now she is going away, anyway. Shravani escapes this situation by telling everyone that she has to look after some work and Narayana follows. Dharani steps out of the house and cries holding her sewing machine.

Get Ready For The Laughter-Riot That Is ZEE5 Original Mrs. Subbalakshmi, Streaming Now

Friendship Day Special: Check Out 8 Celebrities Who Proudly Show Off Their Best Friends