Arjun Or Kartik? Who Will Meenakshi Finally Choose?

Will she go for the man who loves her or the man who is trying to woo her into his web and exploit her? Watch Meenakshi to find out. 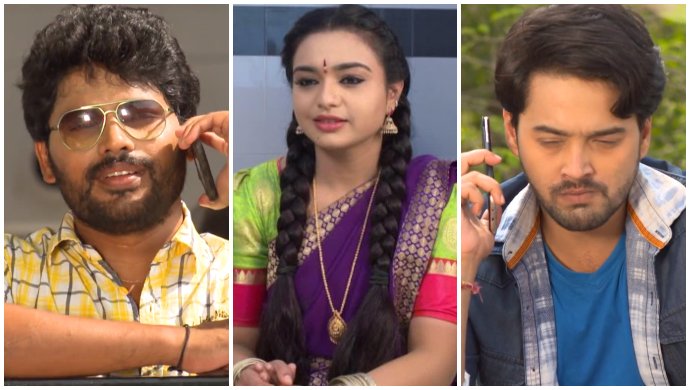 Meenakshi, the latest Telugu serial, has been keeping us on the edge of our seats since the day it started. It is led by popular telly actor Yamini and is supported by famed actors like Jyothi Purnima, Narasimha Reddy and popular Tollywood actor and producer Nagendra Babu. The show is about a strong-willed and selfless girl who takes care of the people around her, thinks for the betterment of everyone and deals with the problems of people around her.

Meenakshi was extremely close to her father (played by Nagendra Babu) and sadly, she lost her eyesight in an accident the same day he passed away. The girl who once took care of the entire family was now weak and felt like a burden on her elder brothers. Meenakshi stood up for everything that she didn’t agree with but now she simply gives in to whatever the people around her want, without giving it a second thought. Everybody in the family wants her to get married and now, unlike before, she doesn’t stop anyone.

One of the most important persons involved in Meenakshi’s accident and her father’s death is Kartik (played by Madhu), who also happens to be Meenakshi’s sister-in-law Roshini’s boyfriend. Roshini, who is Meenakshi’s brother Kasi’s wife, has been plotting with Kartik to take down Meenakshi for once and for all. Their latest plan includes Kartik and Meenakshi marrying each other so that he can exploit her and later run away with Roshini. While the evil shadow of Kartik has been constantly surrounding Meenakshi, there seems to be something else happening simultaneously.

Arjun (played by Anil), on the other hand, has been in love with Meenakshi for a long time now. He also happens to be good friends with her brother Ganesh. Arjun calls Ganesh to inform that he would like to officially meet his family and his sister in an arranged marriage setting. To clarify Ganesh’s hesitations, Arjun mentions that he has spoken about Meenakshi’s visual impairment with his parents.

At home, when his parents realise that Meenakshi isn’t partially blind, they disrespect her and leave from there. But Arjun insists that his love for Meenakshi is real and he will convince her parents for the wedding. In such a case, will Meenakshi give in to Kartik’s plans or will she stand her ground and make wiser decisions?

Let us know what you think below. For some more entertainment and drama, check out Ninne Pelladatha on ZEE5.

Nithin Starrer LIE Is Filled With Love, Intelligence And Enmity! Watch The Film On ZEE5 Now