Given our circumstances in the lockdown, Kamal Haasan has penned a beautiful song & brought it to life with the help of Sid Sriram, Anirudh and more. 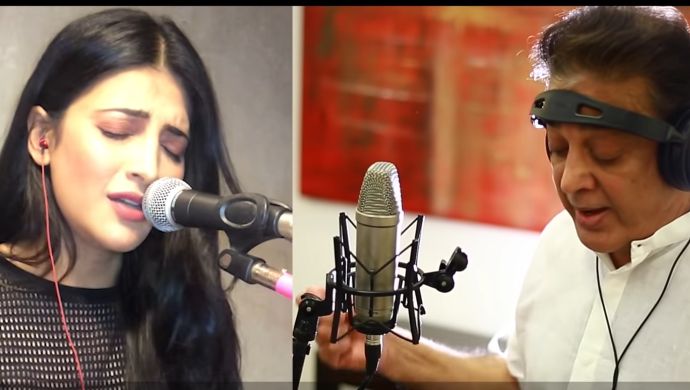 Kamal Haasan has never been afraid of voicing out his opinions. His political career is a testament to his thoughts and his yearning for a better way of life. In these tough times, as the world finds itself struggling to deal with the novel coronavirus, the actor-politician couldn’t help but capture his thoughts, fury and empathy in a motivational song.

Watch him with Venkatesh in Eenadu here:

The song is titled Arivum Anbum which translated to ‘knowledge and love’. Written by Kamal Haasan, the music has been composed by Ghibran. The two have earlier collaborated on Uttama Villain and Papanasam. Apart from the two, the music video, directed by Kamal Haasan, has several leading singers and actors lending their vocals.

Arivum Anbum intends to spread hope and positivity, especially to ones who are losing all it takes to battle another day. The legendary actor believes that it will help people in such times of despair. Not only this, but several actors and musicians have been using their art to spread a positive message. All thanks to social media, we can successfully practise physical distancing and social connecting.

You can also watch Kamal Haasan’s Papanasam on ZEE5.

Omkaram 23 April 2020: From The Importance Of Deepam To Things You Can Do At…

Throwback Thursday: May Peace Return To You As You Enjoy Balakrishna’s Sri…

Amrutharamam: A Bittersweet Love Story Premieres On ZEE5 On April 29