Are Kalyana Vaibhogam’s Jai and Manga finally together?

From hatred and disgust to sarcasm and finally love, here's how the love story between the characters of Sunny and Meghana Lokesh played out 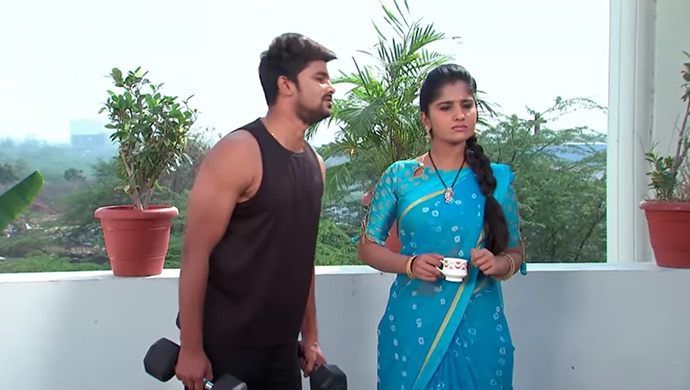 The twists and turns are never ending in the popular Telugu show Kalyana Vaibhogam. The latest twist has brought Jai, played by VJ Sunny, and Manga, played by Meghana Lokesh, together for once and for good. After much hatred and disgust, Jai has finally admitted that he loves Manga and has accepted her as his wife. Their mischievous love story is a delight to watch. But this love story was like a slow cooking potboiler that is finally tasting perfect.

Initially, Jai was madly in love with Nithya (Meghana). Both belonged to wealthy families and were the only heirs. They loved each other and looked perfect together and they didn’t take too long to get married. With Nithya and Jai, everything seemed too good to be true. But soon things took a turn. Nithya learnt that if she stayed with Jai, she would die because of a curse that has been killing the women in Jai’s family for four generations.

Losing Jai wasn’t on her mind and neither was dying for him. Just when she was finding ways to get through this problem she met Manga, Nithya’s lookalike. And that’s when the master planner Nithya weaved her wicked plan. She used Manga as a bait to live happily with Jai. A poor and helpless Manga couldn’t help but walk Nithya’s talk. She spoke, dressed and lived with Jai as Nithya would.

It all seemed to be going good until Manga, out of guilt, confessed. And that’s when Manga and Jai’s true journey began. Not only did Jai insult her at every possible occasion but he also made her feel worthless. Even though Manga had really fallen for Jai, she kept herself strong. She did everything she was supposed to do as a wife, and more. Jai was heartbroken and felt betrayed by Nithya. So he took his frustration out on Manga. Jai’s wrath, disgust and hatred for her was verbally portrayed, breaking poor Manga even more.

But as they say, true love always finds its way. After the initial hatred, Jai cooled down and started to look at Manga as another fellow human. His insulting remarks turned into sarcastic comments. Manga, too, shed her fear and became strong, smart and witty. After much banter, bickering and indirect gestures of appreciation, Jai finally admitted his love for his wife, Manga. After all these days and months, Jai and Manga finally became united.

We wonder what Nithya will do now. Her own game has played her out! Let us know what you think. Until then, enjoy the wonderful love story of Madhu and Mrdula in Ninne Pelladatha on ZEE5.

Do You Know What High Priestess Actually Means? We Found Out