Amrutharamam: A Bittersweet Love Story Premieres On ZEE5 On April 29

A brand new film, Amrutharamam, is coming to ZEE5 to keep you spellbound on April 29, 2020. More details here. 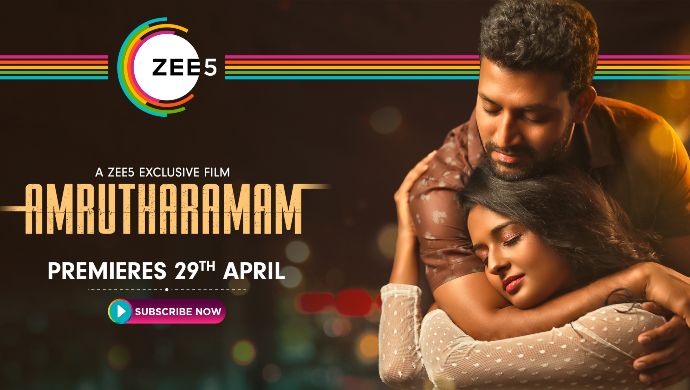 Keeping people entertained and safe inside the houses is the only way to overcome the novel coronavirus. By now, we hope you have been successfully ticking off things on your to-watch list. Because there is something bigger and better, coming your way only on ZEE5. It’s a romantic film named Amrutharamam which will make you feel many waves of emotions.

Amrutharamam is a 2020 movie which was scheduled to hit the big screens on March 27. Given the circumstances, the film never saw a big release. But that’s not something to worry about because digital is a new way ahead and ZEE5 has taken over the worldwide premiere. The film features debutante actors Ram Mittakanti and Amitha Ranganath in lead roles.

The film is set in Melbourne, Australia and revolves around Amrutha and Ram. Amrutha is a newbie who has come to the foreign land to make a name for herself. Her only guiding light in the new country is her elder brother, who happens to send his friend Ram to receive her at the airport. What begins as a simple pick up ends up being much more.

Amrutha and Ram find a spark and fall in love with each other, sooner than expected. But in reality, love stories do not always have a happy ending. Similarly, Amrutha and Ram start seeing the major differences. They leave and destroy themselves. But don’t they say love is just around the corner? We wonder if that’s the case with Amrutharamam.

Amrutharamam premieres on ZEE5 on April 29, 2020. In the meantime, check out more romantic films here.

Birthday Special: 12 Quotes To Remind The World Why Sachin Tendulkar Is The God Of Cricket