In this episode of Amrutham, Anji finds a car for Amrutham, which turns out to be useless. In the end, Anji is gifted that. Read the full update here 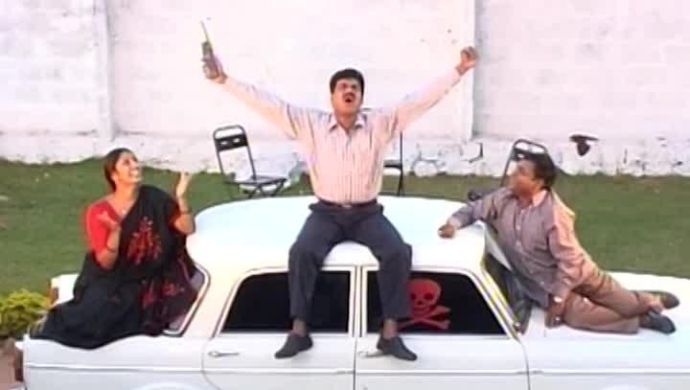 Earlier in the ZEE5 exclusive show, Amrutham, Amrutham pays the rent to a man who looks like his owner but is much better. Later, he finds out that the person who collected the rent was the owner’s twin brother. The twin, Ambaji, had informed Amrutham to lay off the restrictions and live as they please. However, Apparao, the real owner, is offended by this behaviour and asks Amrutham to find another shelter. For the next few days, Amrutham and Sanju try many ways to send new clients away. Finally, Anji dresses up as a goon and warns Apparao to keep the apartment ready for him, which he plans on leasing for 50 years. Scared of this behaviour, Apparao goes to Amrutham and pleads him to stay for as long as he wishes to.

In this episode, Amrutham comes home with torn clothes and Sanju enquires about what went wrong. Amrutham tells her about the accident and Sanju, along with Anji, blame his driving skills. They convince him to buy a 4-wheeler instead. Anji says Sanju would feel proud of her husband when he roams in a car. Amrutham falls for this and wonders if he has the capacity to buy one. Anji suggests that he does not need lacs of rupees to buy a vehicle. He knows someone who can help him get a car in mere Rs 15,000. They all go and get the car home. As they go for their first ride, everything about the car seems off.

For starters, the car’s horn sounds like a cat’s meow, and the fuel needed to run the vehicle is more than usual. In a few minutes, the car stops suddenly. Amrutham gets down to check what had gone wrong. Anji points out to the mechanic shed close by and calls someone for help. The mechanic takes a good look at the car and informs them about all the things that need to be replaced. He finishes off by saying that the cost would be close to Rs 2 Lacs. Amrutham looks at Anji, who suggests they leave the car far away somewhere and claim the insurance money. This rings well with Amrutham and they proceed to do it.

A few days later, a bunch of policemen arrive at Amrutham’s doorstep and enquire about the car. He tries to be jovial and says that there was a nuclear bomb in it, because of which they had to leave it away. This ends up in Amrutham being beaten up, again. Finally, Amrutham makes his peace and takes the car to the office every day, just as Sanju had wished for. However, his boss feels offended by this and asks Amrutham to pick and drop him every day. Amrutham goes with the flow for a few days, until one day, when the car breaks down midway and the boss has to push it all along.

Anji and Amrutham talk about how they can sell the house when Amrutham gets a call. The caller offers him
Rs 7, 000 for the car. Out of inquisitiveness, Amrutham asks who the buyer was and the caller tells him that it is some illiterate fool who has agreed to buy it. They all rejoice in happiness, only to be shocked and disappointed the next day. Shanta comes back home from her maternal house in a car and congratulates Anji. When Anji asks for the reason, she points towards the car and says that his age-old wish has finally come true.

5 Things You Should Do To Make Your Pregnant Wife Happier, Like Jai From Kalyana Vaibhogam