In this episode of Amrutham, Anji loses his one and only job when they end up goofing up with a big project. Read the full update here 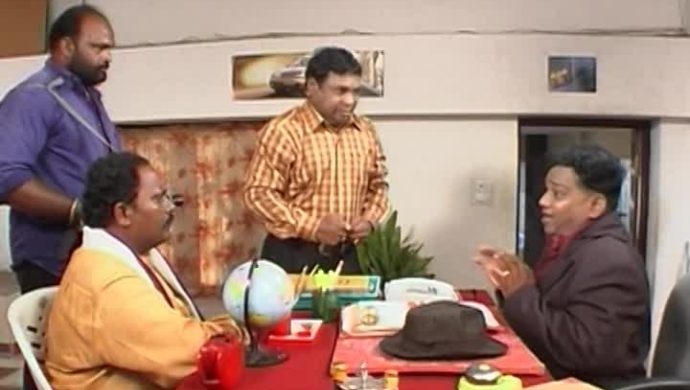 Earlier in the ZEE5 exclusive show, Amrutham, Anji and the protagonist go in search of jobs again. Anji takes Amrutham to a detective agency and they get their first clients, too. Anji meets a man who wants to know about his wife’s affairs. And Amrutham meets a woman who wants to know about her husband adultery. Amrutham gifts a few things to his client as a thanksgiving. Anji mistakes it to be Amrutham’s extra-marital affair and tells Sanju about it. One day, Amrutham and Sanju fight about each other’s affairs, when the said man and woman come to his house. That’s when the clarify the matters and put spying to rest.

In this episode, Shanta hands over the phone to Anji while he shaves his beard. Anji answers the call and tells his boss, on the other line, that he will be present in the office soon. Upon reaching, Anji’s detective boss tells Anji that they have a big project at hand and they will be dealing with people from the underworld. That morning, a barber tries to get clients to his shop, since he had had a slow morning. That’s when one of two dons enters his salon for a haircut. The barber starts shivering with fear when he sees his client keep grenades on the table.

Because of this fear, he ends up missing his grip on the blade and slitting the don’s throat. The barber panics and tries to cover it up with another cloth. He goes outside in search of help when Anji comes to his room. Anji feels happy when finds out that the don he is looking for is in the same salon. He gives a letter to the barber to deliver to the don. The barber takes it and comes out a few moments later stating that the man inside is reading it. He runs away from there, and Anji finds out the bloodied cloth and a slit throat.

Anji calls his boss and they wonder what to do with the don’s corpse. But before they could move or process anything, the second don (the original client) steps inside the same salon. He comes and sees the don lying there unconscious, and goes closer to him. And then, he sees the blood on the man. This gives the client don an attack and he passes away in the arms of the corpse. Anji and his boss run away from the salon and try to hide. The boss tells Anji to never see him again. However, before they could dismiss the matter, both the dons’ henchmen come and beat them up.