Amrutham Episode 28 Written Update: Amrutham Gets Bitten By Many Dogs

In this episode of Amrutham, Anji steps in to save his friend in the courtroom. Read the full update here 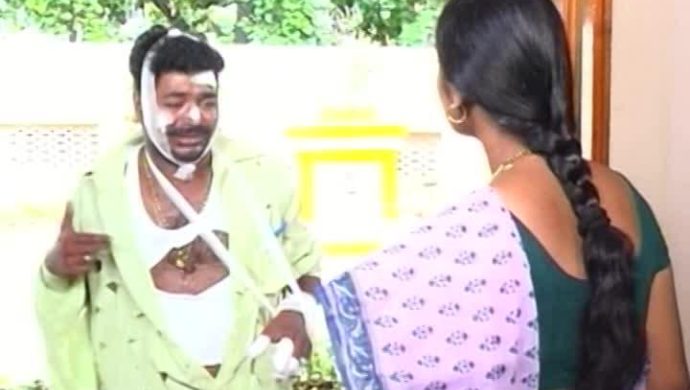 Earlier in the ZEE5 exclusive show, Amrutham, after Ambujanabham fires the protagonist from the job, Anji suggests a new way of earning income. They decide to buy a seven-seater auto-rickshaw and hire a driver to do the job. However, the driver does not show up on time, and Amrutham ends up doing his job. On the first day itself, Amrutham makes all the blunders. On day two, he ends up in a fight with the auto drivers’ union. Finally, Anji brings a bullock cart to fix all the problems, but the bullock kicks Anji before he could land on the ground safely.

In this episode, Anji tells Amrutham how they should move from Kerala to Burma to South Africa to Korea to Japan to America – in order to sell spices, gadgets, and to buy affordable camera equipment and gather manpower from Japan to star in a Hollywood film. Amrutham, who is engrossed in this conversation, calls Sanju to serve them snacks. But she gets annoyed and tells him to quit all the plans and sit at home for a few days. Later, when Amrutham complains of boredom, Sanju asks him to take computer classes.

On the first day, Amrutham returns from the class when a dog bites him. On the second day, another one bites him. This becomes a routine, until one day Amrutham steps on a dog and he starts crying. Amrutham feels haunted by its cries and he tells Anji about it. Anji listens to the voice carefully and claims that he did not hurt any canine. It was definitely a young fox, and with this sound, his bad luck will go away.  But the next day, a few people from the pet-care organisation come and give Amrutham a punishment to bathe 15 wild dogs.

With that Amrutham has to go to the doctor to take more injections. After the injections, Amrutham takes out the frustration on a TV show. This irks the organisation ladies, and they come back to give him another a punishment. Finally, this banter goes to court. When Amrutham fails to defend himself, Anji steps in. He argues so powerfully that the judge rules that the organisation has to pay for all of Amrutham’s medical expenses.