In this episode, Amrutham loses his job and his best friend, Anji, suggests him to gamble to earn money. Read the full update here 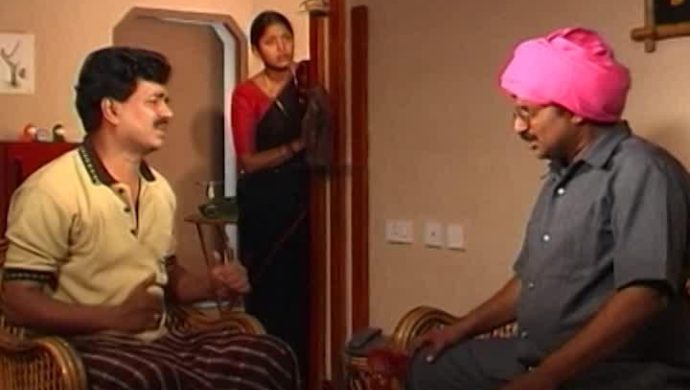 Earlier in the ZEE5 exclusive show, Amrutham, Sanju’s friend asks her to take care of her son and drop him home safely. However, since the child asks for something to eat, Sanju buys lot of things from the bakery. But, by the time she comes out of the bakery, the boy goes missing. The boy, who had gone to fetch his ball, starts crying when Amrutham and Anji find him. They try to help him, but he does not utter a word. So, they take him home and feed him his favourite dishes, hoping to help him and drop him at home. However, by the end of the day, Sanju and her friend file a police complaint, and the cop end up arresting Anji and Amrutham for kidnapping.

In this episode, Anji, Amrutham and Sanju play cards at night. Anji and Sanju suggest calling it a night since Amrutham won all the games. Amrutham claims that he cannot help it because he has a ‘golden hand’ in the game of cards. Sanju tells him to sleep, or else he would be late to the office again the next day. That’s when they hear a knock on the door. Amrutham worries if it is the police since they were playing cards with the exchange of money. However, it turns out to be his boss, Ambujanabham. He wears a bright pink turban, and hands over a four-month sick-leave letter to Amrutham.

Amrutham is puzzled to see this and enquires about the weird situation. Ambujanabham explains that Amrutham’s behaviour over the last few days has been absurd and he needs to stay away from the office. Amrutham trembles at the thought of staying at home, and tries to defend himself. When everything fails, he says that he cannot survive with his ‘family’ (consisting of him and Sanju) with no money for four months. The boss assures him that Amrutham will be paid half the salary during this time. Anji suggests using his great skills and ‘golden hand’ at gambling to earn more money than his office job.

The idea sounds good to Amrutham and the next day, they go to a club. Amrutham, who took Rs 2,000 from Sanju, brings Rs 4,000 at the end of the day. Everyone is excited to see what happens next. But thereon, Amrutham starts losing all the games and goes bankrupt. Finally, Anji suggests him to buy a lottery ticket. When they look forward to the date of the announcement, Amrutham starts crying again because the lottery ticket that he bought was four months old.