In this episode, in an attempt to help a child, Anji and Amrutham are lured by the prize money of Rs 10,000 prize and inevitably become kidnappers 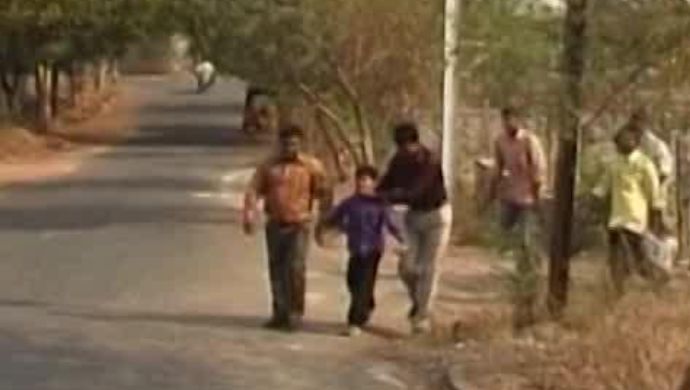 Earlier in the ZEE5 exclusive show, Amrutham, Ambhujanabham, the boss, scolds his sales in-charge because the sales had not increased. The sales in-charge asks the boss to allot some funds to carry out the sales activities. Anji, who had come to meet Amrutham, suggests that he has a plan to increase their sales without spending money. Ambhujanabham diverts his attention to Anji, and asks for the plan. Anji suggests contesting with his competitors in a drama-competition. Since then, they put their heart and soul into perfecting the Ramayana. However, once they get on stage, everything goes haywire and a few kids come on stage to take their toys away – because Anji brought the kids’ toys to use as their props.

In this episode, the newsreader talks about how young kids are being kidnapped by youngsters in the city. Sanju meets her friend on the way, who asks if she can drop her son at home. Sanju agrees happily and walks him home. She stops with him on the way and asks if he wants to eat something from the bakery. The kid starts naming multiple things. Sanju takes him out and asks him to name a few. But his list does not end, so she buys one of each thing available in the store. As she shops, the kid plays with a ball and walks ahead.

The kid loses the ball and starts crying when Anji and Amrutham see him. They decide to help him. Anji asks where his parents were, and why he was crying. When they do not see anyone around him, they decide to take him home. The kid tags along with them, and demands for food when they try to talk to him. The men find no solution and give in to his demands. After a point, Anji orders for sacks full of food for the boy, and he eats it all while watching the television. Anji and Amrutham hear the news, where the newsreader announces prize money of Rs 10,000 to anyone who would find the two kidnappers of a child.

Next, the kid’s image is flashed in the screen, and he starts clapping looking at himself. Anji tells Amrutham that it would be great if they could find the child and take the money. Later during the day, Sanju and her friend go to the police station to file a complaint. The cops start to search for the kid in the entire city. At the same time, Amrutham and Anji roam around the city to find the kid’s house. The police officer recognises the child sitting on Amrutham’s bike and tries to follow them, but his bike does not start.

After some time, Amrutham’s bike gives up and they have to walk further. One by one, men gather and follow Amrutham, Anji and the boy. At one point, Amruthan turns towards them and asks what was wrong. When he sees their rage, Amrutham explains that they are going to drop the boy to the police station. But the men start beating them up on the road itself. Once they reach the police station, the cops ask for Amrutham’s boss and
Ambujanabham comes to the police office. The cops start beating Amrutham and Anji, along with Ambujanambham, who had nothing to do with the problem at hand.