In this episode of Amrutham, Anji is convinced that his best friend has only a week to live so he fulfills his every wish. Read the update 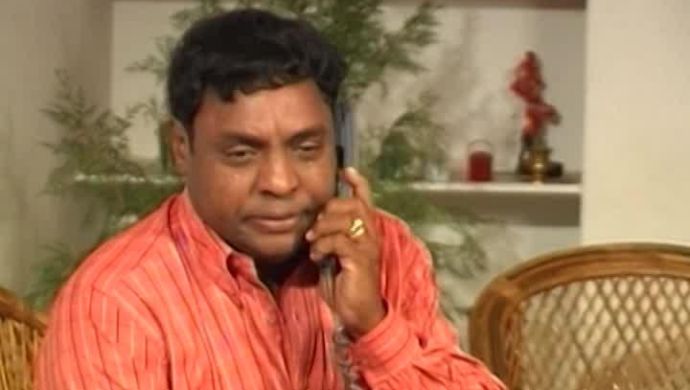 Earlier in the ZEE5 exclusive show, Amrutham, the protagonist fools Sanju by wearing a plaster on his face and tells her that he met with an accident. Sanju challenges him to fool Anji. Amrutham takes an old newspaper and goes to Anji’s house. He announces that his son has cleared his 10th standard exams, and tricks him successfully. Anji challenges him to prank his colleagues. Amrutham gives his boss a massage and puts him to sleep. He goes out to tell everyone that the boss has died. Later, he makes a prank call to his boss and asks him to raise everyone’s salary. But the boss gets the same message from the head office and Amrutham loses out on his appraisal.

In this episode, Anji bores Amrutham by repeating the obvious things, like a newsreader. Amrutham asks him to turn on the news, and they learn about the new disease which is causing death. They also find out that it is caused by a powder, which is being spread by the ISI. The two men are shocked, and they decide to stay cautious of their surroundings. They also get worried for their wives, who had gone for a pilgrimage.

On the other hand, Sanju couriers a packet of Vibhuti for Amrutham, and signs it as ISI (which stands for Icchapurapu Sanjeevini Indrakelandri). Amrutham receives the package and gets excited to open it. The Vibhuti packet bursts open and splashes on his face. Anji sees him, and then checks the packet which mentions ISI. He takes a good look at Amrutham and claims that he has been a victim of the ISI (the terrorist outfit) plan.

Anji also claims that Amrutham will die in seven days, just as the newsreader mentioned. Amrutham starts worrying and sulks in the misery of his situation. Anji disappears for some time and returns dressed in an outfit made of plastic milk packets. He also covers his face with another plastic sheet. Anji tries to console his ‘dying’ friend and decides to help him fulfill all his last wishes when they can. He takes Amrutham to the temple, where they pray wholeheartedly.

Thereon, they travel to the office, where Amrutham gives a piece of his mind to his boss and walks out. Next, they go and meet Appaji, the owner of his house, and Amrutham messes with him too. By the time they come back home, Amrutham feels weaker and unhappy, he goes to the hammock in his lawn to rest. He confesses his desire to be accompanied by an escort. Anji makes an arrangement for the same. While Amrutham enjoys his time with her, Anji meets Sanju and Shanta.

Anaganaga Trailer: Many Intertwined Lives And A Complicated Journey Full Of Love…

Anji is shocked when Sanju talks about Vibhuti’s parcel. Scared with whatever he learned, Anji goes to Amrutham and breaks the news to him. Amrutham starts dancing in joy when he finds out that he is perfectly healthy. Anji reminds him that Sanju is home, and she would be upset if she sees him with an escort. So, Amrutham tries to get rid of her, but she refuses to leave.

Throwback Thursday: Here’s How Adorable Ram Pothineni Has Been Since ‘88!