In this episode of Amrutham, Anji has a plan to save Amrutham from spending some money. But it ends up burning a deeper hole. Read the update here 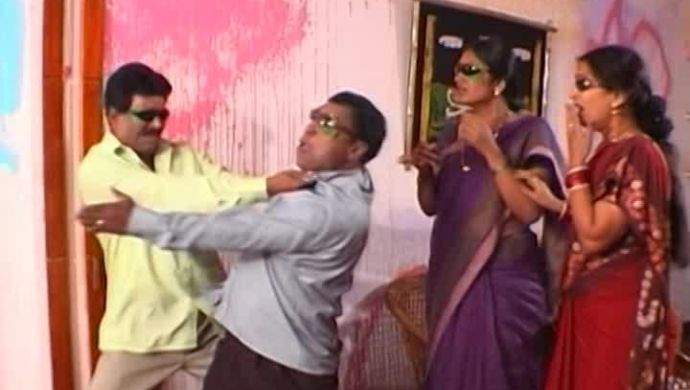 In this episode, Amrutham tries to get Sanju’s attention, who was working silently. She gets annoyed and asks him to go to the office on Sundays too. She goes into the kitchen and asks Amrutham to stay away from the kitchen because there is oil on the floor. She repeats herself twice. But Amrutham is unable to hear her clearly and decides to go and see what’s the deal. Amrutham slips and hurts himself. He turns around and finds some bloodstains on the wall. Amrutham wonders why the wall would bleed. Sanju comes out and says this is what she was hoping to avoid.

Amrutham asks what had happened and Sanju asks him to look at ‘the forehead’. Amrutham assumes something went wrong with Sanju and tries to inspect her forehead. But Sanju takes Amrutham’s hand and makes him touch his own forehead. He is alarmed to see the blood and starts crying, like a little baby. That’s when the owner, Appaji comes to collect the rent. He sees the bloodstains on the wall and asks Amrutham to remove the stain immediately or else he would have to repaint the whole house. Amrutham asks Sanju to bring a cloth and starts wiping the wall without looking at it.

Appaji starts yelling at Amrutham because he ruined the wall, by using a dirty cloth and staining the wall more. Anji comes and sees Amrutham sitting on the floor and asks what had happened. But before he could answer, Anji drags him to play Holi. The ladies refuse to join them. They two men dress in their worst clothes and go out to play Holi, but no one plays with them. They come back home and dress normally. This time when they go out, everyone asks them to join and shower them with Holi colours. Anji suggests that Amrutham needn’t paint the house, and they can make the owner pay for it.

The next day, Amrutham and Anji sit with two glasses of milk, which has bhang mixed in uit.  As soon as Appaji comes home and cribs about the stain on the wall, they convince him to drink the milk, one after the other, and he takes a few minutes until the bhang kicks in. And then, Amrutham provokes him by saying that Anji has taken various forms, like a lizard and cockroach, to tease him. This infuriates the owner and he asks for a gun to kill Anji. Amrutham hands him a water gun filled with different colours and the owner starts shooting it on all the walls. After ruining the house, he falls asleep.

Anaganaga Trailer: Many Intertwined Lives And A Complicated Journey Full Of Love…

But when the owner wakes up again, he thanks Amrutham for painting the house just the way he likes. In fact, he even offers to lay off two months of rent and asks him to paint his home someday, too. Amrutham is agitated to hear this because the house looks like a mess. He looks at Anji, who disappears in a moment. Amrutham starts crying again because he has to pay more money than the two-months rent to repaint the house.