In this episode of Amrutham, Amrutham tells his boss that the new owners have asked him to 'reduce his stuff'. Read the update here 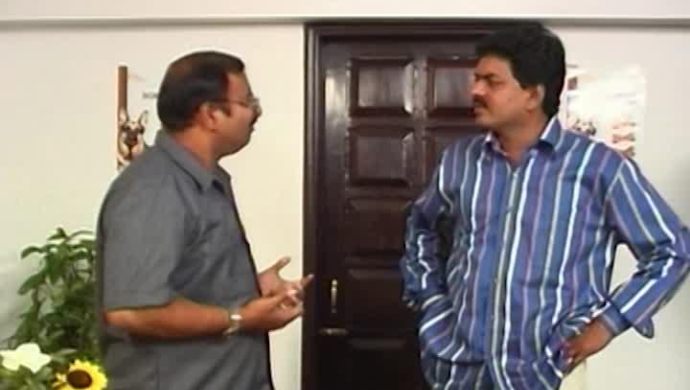 Earlier in the ZEE5 exclusive show, Amrutham, everyone is surprised to see that the boss is happy. Amrutham asks him about the reason and finds out that a well-known company, named Benson and Dickenson, are planning on overtaking their dog-biscuit business. Amrutham starts talking about all the business that the company already owns and talks highly about their culture and work ethic. He suggests that they must have a young employee represent the firm. To do this, Amrutham acts as the manager, while the manager dresses up as a peon. Finally, they get the deal but they ask Amrutham to be hired and the peon to be appointed as the manager.

In this episode, Amrutham’s manager informs the representatives from Benson and Dickson that the mishaps had taken place due to Amrutham’s idiotic plan. He apologises on everyone’s behalf and begs them to take the partnership ahead. The representatives forgive him and promise to take the deal forward. They ask him for some documents before finalising the details, and the manager promises to do it within 15 days. That day, the manager comes to the office and asks Amrutham to attend important phone calls sincerely, as he had to be somewhere else.

Amrutham answers the first phone call, which happens to be from Benson and Dickson. They ask Amrutham’s manager to ‘reduce their stuff’. Amrutham passes on the message to his boss. He explains that the people from Benson and Dickson are all fit, and he needs to be the same – because of which he needs to ‘reduce’ his weight. Thereon begins the journey of bizarre weight-loss. On day one, Amrutham takes his boss for a jog. But the elder man is unable to keep up with him and gives up. Next, he finds a Yoga Teacher, who suggests performing the enema after every yoga poses.

Along with that, the trainer also suggests taking a sauna, every day. Since the boss cannot miss out on his family-time, he does all of his weight-loss activities in the office itself. One day, the boss sits in a sauna-box, in his cabin, and allots the work to his employee. Since he wasn’t feeling the heat, he asks one of his employees to increase the temperature. The employee leaves and in a few moments, the manager finds it unbearable to sit inside the sauna-box. He calls out to many of his team members, yet none could help. Finally, he jumps out of the box and cries for help.

The next day, the yoga trainer takes the manager to the roof and applies mud all over his body. The manager lets the mud soak in as he stands under the sun, designating work to Amrutham. That’s when the Benson and Dickson representatives visit their company again, and are taken aback to see this nuisance. They explain that their message was to ‘reduce their staff’ and not ‘reduce their stuff’. Because they needn’t bother about his weight or his stuff. They give the manager a few days to downsize the company, invite him for a dinner get-together and ask him to have ‘a water-bath’ instead of his ‘mud-bath’.