Gunna Gangaram's Amrutham Dhvitheeyam bagged the honour for the most viewed 'Regional Original Show' at the High Five With ZEE5 Awards. 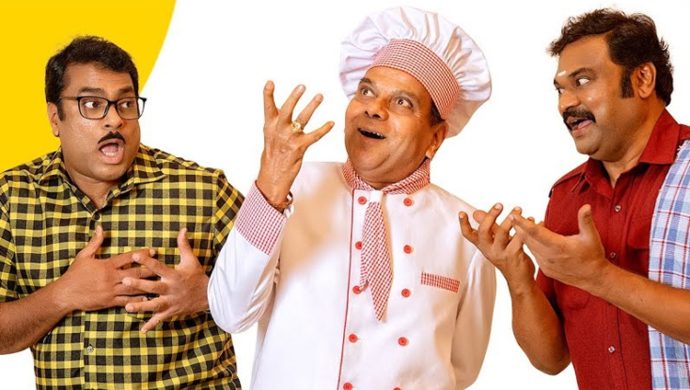 When nothing is in our control, we turn to art. In our current quarantine times, we are all busy immersing ourselves in various pieces of content available to us. From streaming platforms to films and books, everyone is finally completing their pending to-do lists. At such a time, it is extremely important to remember and appreciate art.

In order to do that, ZEE5 hosted its monthly award show – High Five with ZEE5 – this time as well. However, it wasn’t a gathering with media and stars waiting to be on the stage. This time, it was a video conference call which connected all the celebrities together. Apart from hostess Bhavna Somaya, performers from diverse shows and several audience members also joined in to listen to their favourite actors.

ZEE5’s latest Telugu original, Amrutham Dhvitheeyam which stars Harsha Vardhan, LB Sriram and Vasu Inturi, won the most viewed ‘Regional Original Show’. The three lead actors along with Sivannarayana Naripeddi and the writer-producer Gunnam Gangaraju were also present at the video conference and were jubilant that their series has been lapped up by the audience.

When the host asked  Sivannarayana about the key to Appaji’s youth, he said, “taking Amrutham in good doses, every day”. Harsha took a dig at the “Amrutham” he takes. But the writer said “waking up at unearthly hours and yoga”. When he was asked about the feeling of writing the sequel, Gangaraju garu said, “sheer terror! Horror makes audiences scared, comedy makes the makers scared”.

Further, a fan asked if Amrutham would ever be tailored for Hindi audiences or remade in Hindi. To this, the writer said, “ZEE5 would be better at answering it”.

Amrutham revolved around the titular character, who is also known as Icchapurapu Ksheera Sagara Panchamrutha Rao aka Amrutham. He owns a restaurant named Amrutha Vilas and puts his heart and soul in making the business bigger and better. But his friend named Aamudaala Anjaneyulu aka Anji (Amrutham’s chef, neighbour and family friend) makes it difficult and impossible for Amrutham to achieve his goal. Their many mistakes and fails made the show hilarious and unforgettable. The serial has become iconic in many ways.

Amrutham Dhvitheeyam is all about the newer mistakes and failures that entail Amrutha Vilas, which is once again, handled by Amrutham and Anji. Sanju and Shanta, meanwhile, witness the crazy endeavours of their respective husbands. Moreover, the instigating owner, Hanumanth Rao, continues to make their lives more difficult with his strict rules.

Lockdown Poll: Manga’s Death Or Nithya’s Truth – What Will…

Birthday Special: Siddharth – The Man Who Brewed Magic Each Time He Took…

Lockdown Poll: Manga's Death Or Nithya's Truth - What Will Take Over Kalyana Vaibhogam?

If Not A Meal Like Ram Charan, At Least Bake A Cake For Your Wife During Lockdown