The Arjun Reddy hero was spotted at the star-studded bash that Karan Johar hosted for Katy Perry. We wonder if Vijay is all set for a Bollywood debut 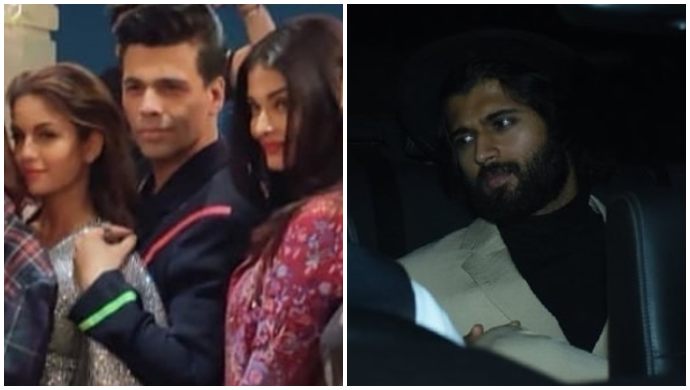 American pop singer Katy Perry will be performing live in Mumbai for the OnePlus Music Festival on November 16. Ahead of this highly-anticipated concert, Bollywood filmmaker and party popper, Karan Johar hosted a night of celebration for the singer. As always, Johar’s party was attended by B-Town celebs. But the one who caught our eye was Vijay Deverakonda! Seeing the recent closeness between the actor and the director, we wonder if a piece of big news is on its way.

Tollywood heartthrob, Vijay Devarakonda gained popularity slowly and steadily in his home ground. From cameos and supporting roles in films like Life Is Beautiful and Yevade Subramanium, Vijay climbed the ladder of success with Pelli Choopulu and Arjun Reddy. However, Vijay’s claim to fame in Bollywood came faster. With director Sandeep Vanga remaking his film Arjun Reddy as Kabir Singh, Vijay became a nationwide sensation.

Cashing in on the next opportunity, Karan bought the right to remake his Dear Comrade, before it hit the theatres. Ever since the filmmaker has expressed his keenness in collaborating with the actor. With Vijay’s visits Mumbai becoming frequent, we can’t help but be curious about this closeness. If rumour mills are to be believed, Karan plans on launching Vijay in December itself. However, the heavy line-up of projects for Vijay and his previous interviews suggest that the actor has no plans on venturing out.

What we do know is that the actor is truly enjoying his time with the Bollywood biggies. He was seen mostly around KJo but also indulged in conversations and took selfies with Alia Bhatt, Arjun Kapoor, Kiara Advani, Jacqueline Fernandez, and the likes. After Prabhas‘ bilingual Saaho, will Vijay Sai Devarakonda be the next to venture into Bollywood? Only time will tell.

Let us know what you think below. For now, enjoy watching this heartthrob in Taxiwaala on ZEE5.

Get Ready To Laugh Out Loud With Pradeep, Aadhi And Sudeer In The New Show Gang Stars

EXCLUSIVE: It's About Balancing & The Numbers To Stay In The Semi-Final Of ZEE Heroes