Both the Telugu stars have taken the #ZEEWaterPotChallenge. Get inspired by them and do something for the little birds this scorching summer. 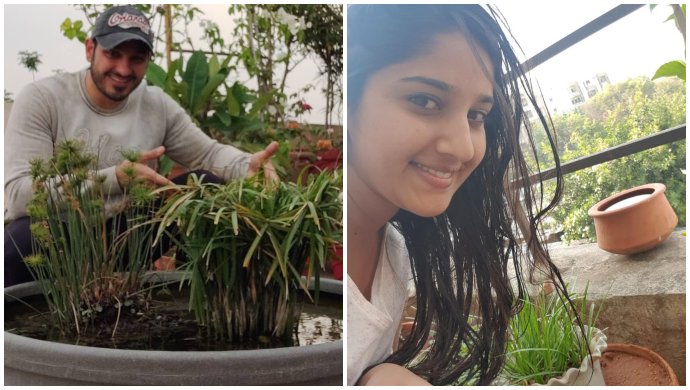 These stars might be scorching the screen with their acting and screen presence, but in real life, they are doing something to make summer bearable for other living beings. Meet Ali Reza and Thanuja Gowda, who have taken up the #ZEEWaterPotChallenge, keeping a pot of water on their terraces so that birds don’t need to keep flying in search of clean drinking water.

Take Ali Reza for instance. The actor has been capturing hearts with photo shoots, modelling, acting in shows like Pasupu Kumkuma and Maate Mantramu, and has got us all starry-eyed. Ali can raise the temperature anytime and anywhere with his enviable and admirable physique. But did you know he does things to help when the heat outside is burning too?

In the show, Maate Mantramu, Ali’s character Vamsi may be going through a rough patch, drinking alcohol instead of water. We know that’s because of all the frustration from missing his heart-friend and denying his feelings for Vasundhara. But in reality, Ali is up to something good.

The handsome hunk, Ali took up the #ZEEWaterPotChallenge to make the scorching summer a little soothing for birds by setting up a large pot of water on the terrace of his house. He shared a picture of it on his Instagram and encourage his over 80,000 followers to take up the challenge and do their bit to make the summers a little comfortable for birds.

Do your bit for the 🐦 this summer. (My home has this the whole year. There are even fishes in this huge pot) I hereby nominate my Insta family to do it and please tag me cause I would like to share it on my account. #zeewaterpotchallenge @zee_telugu

If you still aren’t inspired, how about you watch your favourite actor Meghana Lokesh follow the same step? She has set up a mud pot in her balcony. She posed with the water-filled pot and posted the picture on social media to encourage her over 242,000 followers to do the same.

In the show, the Kalyana Vaibhogam star is busy convincing people of her innocence and love for the man she married. But in reality, she is busy doing something for the greater good.

Pledge to put water pot for birds this summer .. hope my insta family will love to do it, and when you do it please share it with me.. I will post your pics in my insta account! @zee_telugu #waterpotforbirds #zeewaterpotchallenge

It is time to do your bit! Get a water pot ready for the little birds and post the picture on social media with the hashtag #ZEEWaterPotChallenge. And do not forget to spread the word. Once you’re done with the good deed, you are almost a Srimanthudu like Mahesh Babu, right? Head to ZEE5 to watch the film.

Celebrate The Greatness Of Family As You Watch Brahmotsavam On ZEE5

During the shoot, Amala and I were friends only during breaks, says director

Will Jai And Manga's Love Story Succeed In Kalyana Vaibhogham?