Many things have happened on the stage of Padi Padi Leche Manasu. It will make you laugh out loud and make you sob a little. Check out the promo here. 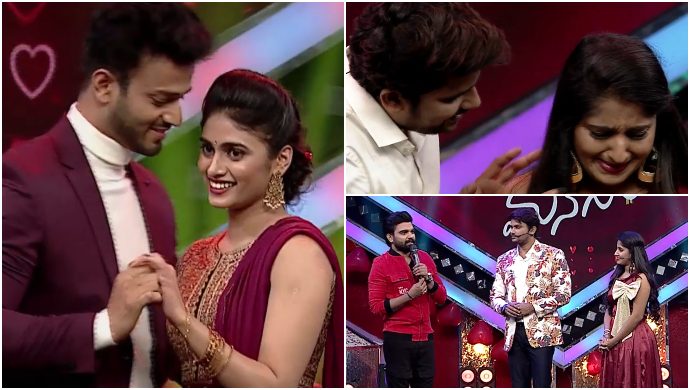 Making your Valentine’s Day more special, Zee Telugu brings to you a unique show. Bringing together all the popular couples of the channel, Padi Padi Leche Manasu will entertain you through the weekend. It has dance performances, surprising song rendition, special appearances, fun games and loads of emotional moments. Before you watch the show, this Sunday here’s a little sneak peek.

We were expecting the seasoned couples of Zee Telugu family. The ones who came as a surprise were the new entrants. The couple from upcoming show Trinayani danced to Butta Bomma from Allu Arjuna’s latest film. Anu and Arya of Prema Entha Madhurame, too, danced to the theme song of their show.

Amidst hosting the show brilliantly, VJ Sunny aka Suryadevara Jaisurya of Kalyana Vaibhogam took some time to turn the aura romantic. With dim lights and a spotlight at him, TV’s hunk sang the popular Sid Sriram’s song Emmai Poyave.

Meghna Lokesh, who was co-hosting the show, broke down on stage when Sunny surprised her. He presented a video message from Swaroopa, Meghna’s husband, where he confessed his love for her. Meghna missed her long-time-boyfriend-turned-husband on the day of Valentine’s Day and couldn’t hold back her tears.

Zee Telugu’s star anchor and a man who can create magic with his words, Pradeep Machiraju also graced the show. He spoke about his upcoming film titled 30 Rojullo Prema Ela?. The couples surprised Pradeep with a dance performance on his song, Neeli Neeli Aakasam. And this moved the anchor, who compared his happiness of coming to Zee Telugu to that of a girl’s happiness when she returns to her mother’s home after marriage.

In other news, the heartthrob of the telly world, Akarsh Byramudi came all by himself to the show. And Adhirindi’s Gully Boyz decides to make the most of this opportunity. However, Akarsh brought his real-life partner on the stage and shattered my hearts.

Which part of the show are you most excited about? Let us know in the comments section below. Watch the full show on 16 February 2020 at 6 pm, on ZEE5. You can also check out Local Gangs and Adhirindhi, in the meantime.