After Sensing Kartik And Roshini Standing Together, Will Meenakshi Believe Anything? 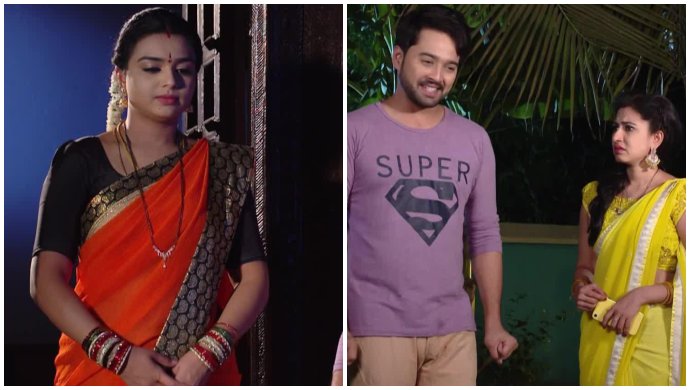 It seems as though Meenakshi has been caught in a blanket of problems. As much as she tries, the titular character of this Telugu TV show just can’t seem to be able to get out of the mess. In the recent episodes of Meenakshi, she got married to Kartik – as per his and Roshini’s original plan. In the episode dated May 14, 2019, we see that Kartik goes missing after the wedding and does not answer anyone’s calls. Here’s what happens next:

Kartik has revealed his true identity and intentions. He has been with Roshini not because he is in love with her, but because he wants to take her family down and avenge his father. Kartik also confesses to his sister and unconscious mother, about whom he didn’t tell anyone, that he will be a good husband to Meenakshi and will not spoil her life just for the revenge. He leaves his house with a saree for his newly-wedded wife. When he returns, Meenakshi’s brother Kasi and Ganesh are about to slap him, but Meenakshi stops them.

Kartik clarifies that what he had done was wrong but he had gone for a good reason. He hands the saree to Meenakshi and tells her that it has been blessed by his mother. Meenakshi is overwhelmed by the gesture and forgives him for leaving unnoticed previously. Kasi suggests that everyone must hit the bed since they had had a long day. Roshini is asked to share the room with Meenakshi for the night.

In the middle of the night, Roshini texts Kartik to meet her outside. There, she questions him about his intentions behind marrying Meenakshi and the saree gesture. Kartik smartly tackles her questions by manipulating facts. Meenakshi notices that Roshini isn’t in the room with her. She goes out to the corridor, where she senses Roshini’s perfume while she hears Kartik pretending to be on a call.

Kartik tells her to sleep. When Meenakshi gets back to the room, she finds Roshini there. Meenakshi goes to sleep, but she has questions in her mind. In the next episode, we will see that Meenakshi and Kartik are in their room. When she touches Kartik’s feet as a gesture of respect, Meenakshi breaks into tears. Does this mean she does not have a clue of what happened? Does she trust Kartik? Stay tuned to know.

For some light-hearted drama, check out Maate Mantramu on ZEE5.

Watch The Hilarious Journey Of Lakshmi Manchu In And As Mrs. Subbalakshmi On ZEE5

Kalyana Vaibhogam 15 May, 2019 Preview: Jai, Manga And Nithya Are Stuck In The Same Place