In this episode, Nagendra Babu and Navdeep laugh out loud at the madness created by the four comedians. Watch the promo here 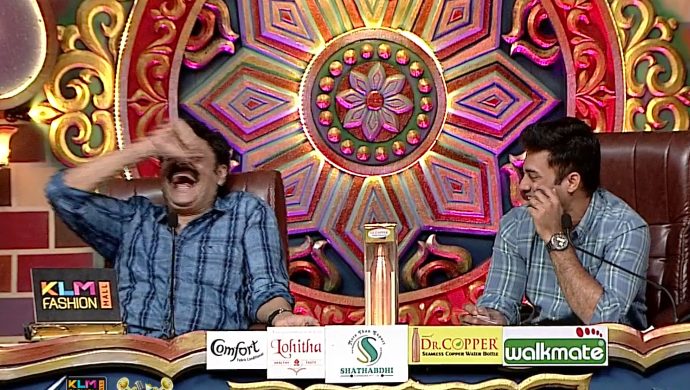 Thank god, it’s the weekend! And, that means Tollywood’s Tower Star Nagendra Babu and Navdeep bring yet another episode, full of madness and hysteria in Adhirindi. Every time we think that Dhanraj, Chandra, RP and Venu cannot make us laugh any harder, they come back with a bigger bang and make us laugher harder than before. After the amazing Sankranthi Special episode, Adhirindi is back with its fifth episode and we’re sure you will love it, too.

Watch the hilarious promo of the next episode here:

In this episode, Navdeep and Naga Babu keep it simple and twin with their coordinated blue plaid shirts. The main men of the show take the seat, and Sameera, the host, takes charge of the episode with her classy take. In this episode, Chammak Chandra’s Challengers go crazier than ever with their skit. Chandra plays a drunk groom, who tries to abide with all the ‘wedding rules’, like eating before it’s too late and never missing a starter. His father has to remind him that those aren’t the rules that he must be going after in his own wedding.

Venu and his warriors takes us back in time with his comedy skit. The year is 1960 and Venu is a filmmaker, who takes his entourage to Madras Patnam to get an actor on board for his film. However, he meets with an accident and ends up in a coma. But when the actor’s son comes requesting him to wake up and make a film, guess who comes out of the coma? And for RP and Dhanraj’s skit, we believe it’s best to save them for the visual treat that they are.

Watch the full episode on January 5, 2020, on ZEE5, before TV. Watch the previous episodes here and do not forget to check out all the updates here.