ABCD Review: On-Screen BFFs Allu Sirish And Bharat Will Take You On A Joy Ride

Starring Allu Sirish in the lead, this Telugu film is a fun-filled one that is totally worth your time. Read the full review here. 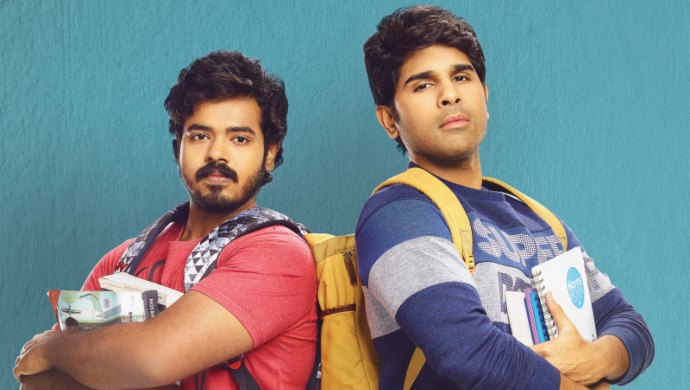 Hailing from one of the first families of Tollywood, Allu Sirish marks his entry on the 70 mm screen after two long years, with ABCD – American Born, Confused Desi. The title makes it very clear — an American boy of Indian descent struggling to find his ground, that’s Allu Sirish as Aravind Prasad aka Avi. He the son of a man (played by Nagendra Babu) who left his country in search of a better life, settled down in America and is currently a millionaire. His mother is a strict Telugu lady who will not sacrifice her language and customs in the foreign land for any reason and of course, we have a side-kick in Bharath aka Bashaa, short for Bala Shanmugam. Lastly, we have Avi’s love interest and the reason behind this Telugu film’s plot, Neha, played by Rukhsar Dhillon.

The film begins by introducing Avi and Basha, two New Yorkers for whom luxury isn’t an idea. It’s a lifestyle. A $50 or $100 bet on who manages to put the ‘tasteless burger’ in the trash can, is not a big deal for them. They speak fluent Telugu and can also read the script. Yet we are told that they are highly unaware of their culture and native land. Avi’s father is proud of all that he has earned but his only discomfort is watching his bratty son recklessly spend money without much thought.

In a scene, Avi’s mother ignores his ‘what’ for breakfast?’ until he translates it in Telugu. But on the breakfast table, while congratulating Avi for breaking up with the ‘white girl’, she tells her husband that they need to move on with time. She further adds that drinking and dating are common for teenagers and reaffirms that this is the time to have fun. Yet she believes that only a Telugu ammayi can win his heart. Basha, who clearly follows his cousin Avi, comes across as a bad company to his parents. Director Sanjeev Reddy seems to be playing with two contradicting personalities in the same film.

Considering his taken-for-granted attitude and lack of empathy, Avi’s father decides that it is time to teach him a lesson — by teaching him the value of money. And that, really, is where the film begins. It’s time to send Avi and Basha to their motherland. There they ought to learn the value of money, relationships and other life lessons that seem to be vague ideas to the millionaire heirs. It all starts as a mini-vacation in India. But… the real fun is just about to begin.

In a cameo, Viva Harsha brings his comedy skills as the driver who picks them up from the airport in an old Indigo. He drops them in a basti, which is their stay for the month. Avi and Basha are offended by such poor services by his father. They try for better things but there’s no liquid cash, only blocked cards and no phone service. Eventually, they have to enrol in an Indian institution for their MBA. There Avi meets Neha, who sweeps him off the floor at first sight. In order to impress her, he narrates a fake story, happily ruining the image of his family members.

Circumstances bring him to a point where he becomes the direct threat to an aspiring MLA — Bhargav, played by Raja Chembolu. Raja does complete justice to his part, yet there’s not much for the actor to play around his character with. Editor Navin Nooli uses his sharp skills to show us two sides of the same coin. A scene between Avi, Basha and Bhargav and his men sets the course to what their future holds and is bettered by Navin’s inter-cutting.

Avi’s love-interest Neha meets him much earlier, but their story starts close to the second half. Rukhsar looks dreamy on the screen as her tresses wave perfectly with the wind. She believes in Avi’s fake story and makes sure that he gets the limelight that he deserves. That’s how Avi becomes an overnight youth icon. Through the course of dealing with the sudden limelight, Avi and Basha start as con-men trying to take money for a home run, they fight politicians and become the voice of the repressed people. Finally, he redeems his misdeeds by realising his wrongs and wants to what is right, for once.

Vennela Kishore graces the film for three scenes in the film — beginning, climax and post interval, as an enraged journalist. His portrayal is hilarious, as usual, and makes you think twice about your surroundings. On the days when you really want to watch something but don’t know what, ABCD is your pick.