Starring Atharvaa and Megha Akash in the lead roles, Boomerang is an interesting and gripping thriller about two people with one face. Watch it here. 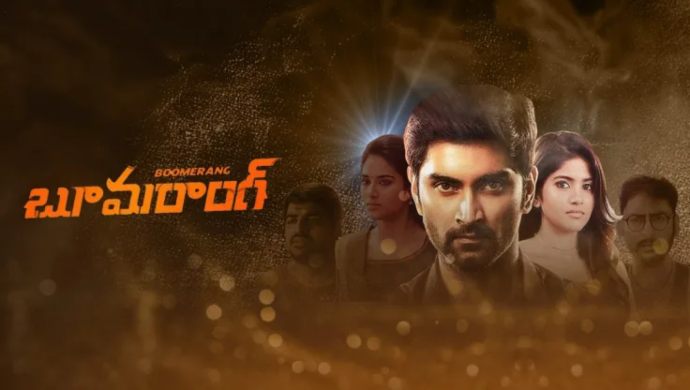 Watching films or original shows is one of the best ways to enjoy lockdown. With very little scope to do something, indulge in some of the most interesting ideas through films, like Boomerang. Starring Atharvaa and Megha Akash in the lead roles, Boomerang released in 2019. This is originally a Tamil film directed by R. Kannan. The movie, also starring Upen Patel, is a nail-biting thriller that will keep your hooked to the screen until the end.

The film begins in a hospital where one person, named Shiva, is being rushed into the ICU. The doctors declare that his face has been destroyed beyond recognition and a face transplant is the only way to save him. In the same hospital, another lady keeps weeping upon the death of Shakthi, who is brain dead. The doctors try to connect the dots and encourage Shakthi’s folks to allow a face transplant to Shiva. The operation goes successfully and the story begins.

Shiva thrives in his second innings at life, with a brand new face. Along with many stable things, he also has a girlfriend named Gigi. However, things start to go wrong when Shiva notices the number of random attacks on him. He believes there may be some connection between the attackers and Shakthi, whose face he bears now. That’s when Shiva decides to unravel the mystery and goes to meet people close to Shakthi, along with Gigi and his friend Shanmukham.

A few people help Shiva in reaching Shakthi’s village. On the way, Shiva dashes into a stranger and helps by taking him to the hospital. Upon reaching the village, more attacks take place. Incidentally, they bump into Maya in a local hospital. She guides them through Shakthi’s life and also uncovers the reason behind these ‘random attacks’. Will Shiva empathise with Shakthi’s story? What is the dark secret of Shakthi’s life?

Loser Trailer Review: Three Losers Come Together To Witness Victory In This ZEE5…